This is point sparring.  We are not going for staggering contact or knock-outs.  Judges will stop the match and call points when any judge/referee calls “break” or “point.”  Time will not be stopped to call points.

Single elimination.
One round lasting two minutes or first one to reach five points.
All points are one point.

All students must wear approved protective headgear, gloves, foot pads, mouth guard, groin protection (males only) when competing. Forearm guards and shin guards are not mandatory but recommended.  “Sock/cloth” sparring gear or anything where toes stick out are not allowed.  Same with open hand MMA gear (see example at the bottom) and Ringstar or “mat shoes.”   Most competitors use foam dipped gear found at Century, Macho, Asian World, etc.  If in doubt, call us or come watch a tournament before competing.

All contact will be light and controlled to all legal target areas which are as follows: the protective headgear (not the face area, top of head, or neck), the front of the body above the belt and before the seam on the rib cage area.   Legal striking tools are feet & hands.

Due to hemophilia and the occasional accidental clashing, disqualification due to drawing blood will be like all other judges decisions where majority decides.

A point is awarded for close techniques that could have connected to a legal target area IF the other competitor does not amply defend by blocking or stepping out of range.

Strikes to the back area

Strikes below the belt

Sweeps or grabs of any kind

Striking if opponent is down

No blind techniques – spot target BEFORE striking when spinning.

No hammer fist or axe kick to top of head.

Recklessness, excessive contact, and horseplay may result in a warning point and/or expulsion from the competition.

Running out of the ring or falling down to avoid a point or “run the clock” will result in a verbal warning and may lead to points being awarded to the other competitor. As long as one foot is in the ring, the person can score a point regardless of whether the other opponent is in the ring or out.

Warnings – first warning is typically verbal but can result in disqualification or point awarded to opponent.  Second warning for same infraction will result in a point being awarded to the opponent.  Should a warning be called, the center judge will call for warning first and then points.  A competitor being warned with a penalty point can not receive a point.

Example 1 – The white competitor is a little over zealous and strikes a little too hard to the red competitor.  They may get a verbal warning to the effect of, “easy on the contact” but still awarded a point.

All judges have equal say in point and warning calling. Center judge is merely meant to be the conductor and his/her say has no more weight than anyone else.

Coaching – the match is two minutes long.  During those two minutes, no coaching is allowed.  Cheering is great – coaching (from anyone) is not.  Judges will treat coaching warnings like any other warning.  Two warnings and the other competitor gets a point.

What to do if your student is in your ring.  Be professional and make fair calls.  If this is too much, ask for another ring or pay the spectator fee and watch from the spectator area.

See an arbitrator if any problems that can not be resolved in the ring. Arbitrators will be announced before the competition begins.

What we expect: A safe and fun competition for the entire family that will make people feel compelled to attend every year. Please refrain from foul language and tobacco products while at our family event.  For many people, this may be their first competition.  A bad judge or bad experience may very well stop them from ever competing again in this tournament or anyone’s.  So please be professional and make sure everyone has a safe and fun experience. 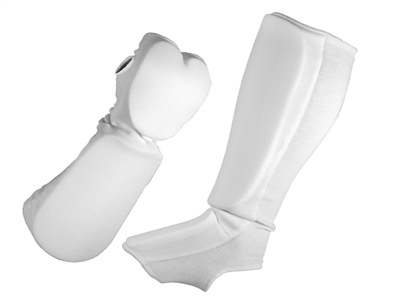 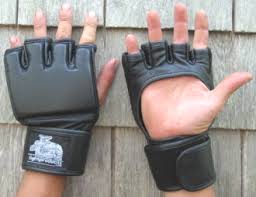 The gear shown above does not provide enough protection for the other competitor and not allowed at GCMAC.